With headquarters located in Gland, Switzerland (near Geneva), the IUCN, which is celebrating its 50th anniversary this year, is supported by a staff of over 1,000 people in 45 offices and hundreds of partners in public, NGO and private sectors around the world.  At any given time, the organization is conducting thousands of field projects and activities, all aimed at the sustainable management of biodiversity and natural resources.  Its leadership is governed by a council elected by member organizations every four years at the IUCN World Conservation Congress, and the organization also holds Official Observer Status at the United Nations General Assembly.  The organization’s primary mission is the conservation of biodiversity, and it plays an instrumental role in demonstrating how biodiversity is fundamental to addressing some of the world’s greatest challenges, such as climate change, sustainable development and food security.   The organization is supported by over 11,000 scientific experts setting global standards in their fields, such as the definitive international standard for species extinction risk—the IUCN Red List of Threatened Species.   Through the collective strength of more than 1,200 government and non-government Member organizations, the IUCN influences environmental conventions, policies and laws around the globe.

1. Valuing and conserving nature.  It recognizes biological diversity as being essential for human well-being, with its elements (ecosystems, genes and species) sustaining the life support systems of the planet.   Such biodiversity provides food security, human health, clean air and water, and contributes to the economic development that supports local livelihoods.

By putting nature at the center of efforts to improve quality of life, through a people-centered approach and fair distribution of resources, the IUCN hopes to influence global production and consumption patterns that are destroying our life support system on Earth.   By recognizing how we are underutilizing the potential power of nature and the solutions it can provide, the IUCN hopes to educate people, communities, governments and private actors how  to rise and meet the global challenges we face today.  To learn more about the IUCN, visit their Web site at http://www.iucn.org .

The IUCN Red List of Threatened Species is the primary source that the Artist has used to research and convey information about the animals depicted in these images. This program was developed by the IUCN Global Species Program working with the IUCN Species Survival Commission to assess the conservation status of species on a global scale.  For over 50 years, this consortium has been working to highlight plant, fungi and animal species threatened with extinction and to promote their conservation. The species assessed by the IUCN Red List are the bearers of genetic diversity and the building blocks of ecosystems, and information on their conservation status provides the foundation for making informed decisions about how best to conserve biodiversity on a local and global level.  The IUCN Red List's main purpose is to highlight those species facing a higher risk of extinction. Using a set of categories and criteria to determine the risk of extinction, it groups species into a rating system listed as Extinct, Extinct in the Wild, Critically Endangered, Endangered, Vulnerable, Near Threatened, Least Concern, Data Deficient and Not Evaluated.  Only a small number of the world's plant, fungi and animal species have been assessed.  In addition to those not yet assessed, the IUCN Red List does not assess species that went extinct before 1500 AD.  The specie groups that have been coomprehensively assessed include the amphibians, birds, mammals, freshwater crabs, warm-water reef building corals, conifers and cycads. A large majority of plants listed in the 1997 IUCN Red List of Threatened Plants remains yet to be evaluated against the newest IUCN Red List criteria. The image below, captured from the IUCN Red List's Web site, shows their classification system. 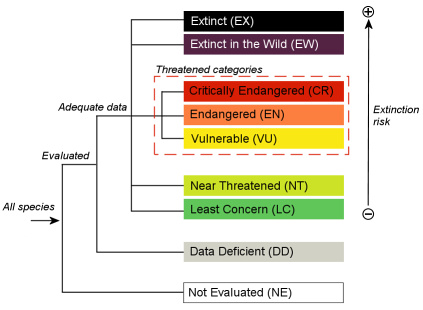 The chart below, captured from the IUCN Red List Web site, shows the rate of extinction of species within four major key classifications. The alarming aspect of this chart depicts how quickly corals are becoming extinct. 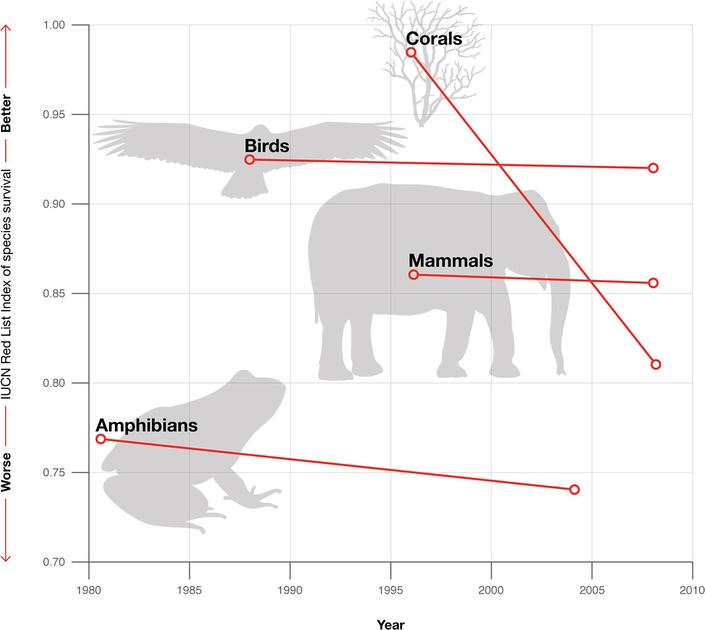 Coral reefs, which rival rain forests in the number of species that they support, form the foundation for much of Earth's food chain which nurtures and protects the food source for which so many species will directly or indirectly rely upon.  At the base of this web are algae, sponges, invertebrates and soft corals, which supports the oceans' fish, from small herbivorous fish to large predator fish that feed on them.  It also supports marine crustaceans, reptiles and mammals, from lobsters and octopus, to dolphins and sea turtles.  We hear little about the destruction of corals around the world, but their survival is key to our survival as well.  They are the oceans filter feeders which cleanse the oceans by consuming particulate matter suspended in the water. The creatures that rely on the reef are also algae consumers, keeping the oceans algae in balance and other species that rely on the reefs play a role in keeping other species' populations in control.  The National Oceanic and Atmospheric Administration of the United States Department of Commerce says that 20% of the coral reefs have already been destroyed, with half of the remaining coral reefs now under risk of collapse. The top threats to corals are climate change, unsustainable fishing and land-based pollution, all due to human activity. Carbon pollution from factories, cars and power plants is altering the oceans' chemistry, making sea water more acidic, threatening the survival of the coral reefs and the organisms that rely upon it. The acidification of the oceans is robbing the corals of the chemicals they need to build their tough outer shells.  It has been reported that 75% of the world's oceans will be too corrosive to support coral and marine crustaceans by the end of this century. 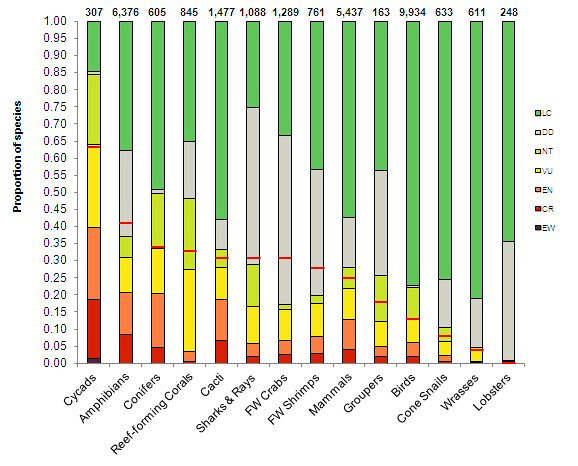 The chart above is also from the IUCN Red List's Web site.  It shows a more detailed listing of the specie categories with their threat levels by rating classification.  The Cycads appear to be in the greatest threat in this chart, as 84% of their species now have a threat rating of Near Threatened or worse.