The "3rd International Biennial of Fine Art and Documentary Photography" will be held in Malaga, Spain, at the Municipal Heritage Museum, opening September 19 and running through November 9th, 2014. On exhibition will be twelve images from George Grubb's "New York City Wildlife" series, plus an additional four prints of his nature photography featuring Bornean orangutans photographed in the jungles of Borneo. In addition to these 14 prints on exhibition, a video capturing the wild orangutans traveling through the jungle of Tanjung Puting National Park will also be projected, which the Artist captured while visiting this part of the World in December, 2013.

The exhibition is produced by The Worldwide Photography Gala Awards, in conjunction with the City Hall of Malaga, and The Cultural Association La Lupa. This is the third exhibition of the Biennial, which travels to different cities each occurrence. The first biennial opened at the Circle of Fine Arts in Madrid in 2010; the second then opened at the Borgest Cultural Center in Buenos Aires in 2012. In this third edition, the Biennial will showcase the works of 164 artists representing 25 countries in a 8,400 sq/ft space at the modern Heritage Municipal Museum of Malaga. The Museum hours: Tue-Sun, 10am to 2pm, and 5pm-8pm. Entrance is free to the public. An opening reception will be held on September 18 from 8pm-10pm providing an opportunity for the public to meet the artists. I plan to be there to attend. The museum (Museo del Patrimonio Municipal) is located at Paseo de Reding 1, Malaga, Spain. A Web site announcing the event is at http:/​/​malagabienal.​com

Exhibition in this Biennial occurred as a result of two Second Place wins in the 6th Pollux Awards in the United Kingdom: 2nd Place Prize in the Fine Art Category for "Reigning Over Central Park" from the "New York City Wildlife" series; and 2nd Place Prize for "Female Orangutan With Baby" in the Animals & Wildlife Category. The 6th Pollux Awards were held in 2014, at Regency House, Westminster Place, York, UK. 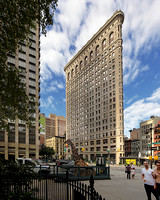