Juror, Jack Fulton, has selected, "Forgotten No. 1," as a Gold Selection in the North Valley Art League (NVAL) 2016 International Juried Photography Show, to be held at the Carter House Gallery from May 3 through June 4, 2016. Mr. Fulton, Professor Emeritus, works at the San Francisco Art Institute and has been involved with Fine Art Photography since 1965. He has taught in the Photography Department of the San Francisco Art Institute from 1969 to 2013, and was Chair of the Department for approximately half that period. He designed the complete darkroom facilities and curriculum, also introducing color, historic processes and the digital environment. He also taught at UC Santa Cruz, Colorado College, Emily Carr in Vancouver, Ansel Adams Yosemite workshops, the Museum of Photographic Arts San Diego, Anderson Ranch and in Lisbon Portugal. His body of work has earned him numerous awards, including two NEA Fellowships (1970 and 1990) and an NEA Publishing Award, which brought forth a book on walking in the Sierra Nevada: 2 Saunters: Summer & Winter.  Mr. Fulton's work has also been exhibited at many notable venues, including SFMOMA; Oakland Museum; Los Angeles County Museum; University of AZ; Chicago Art Institute; Biblioteque Nationale, Museum of Modern Art of the City of Paris; Seagram's; UNOCAL, and the San Jose Museum of Art.

The Gallery is located at Caldwell Park, 48 Quartz Hill Road in Redding, California 96003.  An opening reception is being held at the Gallery on Saturday, May 7, from 6 to 8pm.  The North Valley Art League is an all-volunteer, non-profit organization dedicated to furthering the visual arts in the northern California region. 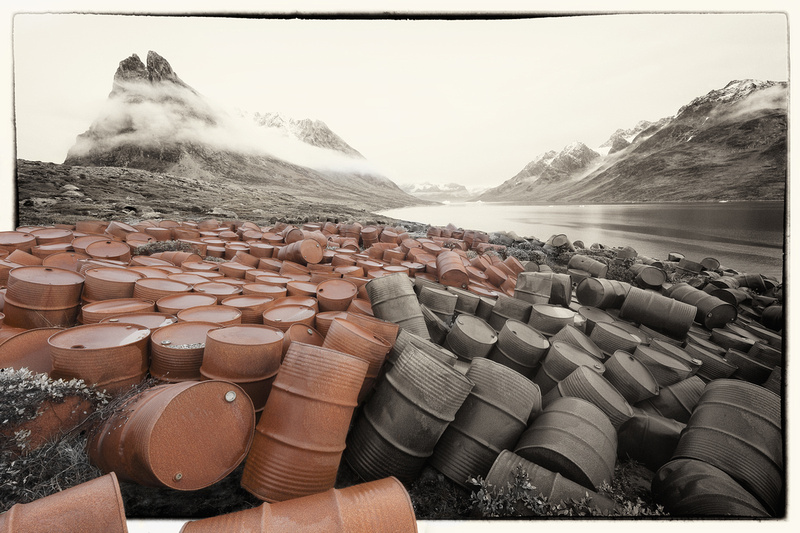 Forgotten 1"Forgotten" is a portfolio of images that depict an old abandoned World War II U.S. Military Base in East Greenland, that is yet, to this day, to be cleaned up. The fuel drums continue to leak over a half-century later, reminding the viewer of the lingering destructive cost of war. The digital technique used in this series metaphorically combines the historic black & white photographic style with the contemporary color edge-bleeding technique to represent the lingering passage of time.

The selected image, "Forgotten No. 1," is from the Forgotten - Series II.  "Forgotten" depicts a World War II U.S. military base in East Greenland whose scattered fuel drums continue to leak more than a half-century later. This second series integrates a stylistic technique that merges low-key, historic-appearing black & white photographic style with contemporary bleeding-edge-color to metaphorically remind us of the cleanup that remains.  The complete portfolio is available online to view at http://georgegrubb.com/p1057186646.