Having been just elected as a Resident Artist Member of the Salmagundi Club, I had the opportunity to participate in my first member exhibition at the renowned art organization which has been a center for American Art since 1871.  Their landmark house is the last surviving brownstone on lower Fifth Avenue, originally built in 1853 as the residence of Irad Hawley, president of the Pennsylvania Coal Company.  In November 1917, the building was acquired by the Salmagundi Club, one of the country's oldest organizations serving artists.  With a 143 year history of fostering the development of American Art, the club's collection comprises nearly 1,600 works of art and hosts three galleries that are open to the public throughout the year.  Its membership has included the likes of Ernest L. Blumenschein, William Merritt Chase, E. Irving Couse, J. Francis Murphy, Howard Pyle, Edward Potthast, Theodore Robinson, F. Childe Hassam, Louis Comfort Tiffany, Carl Rungius, Maynard Dixon, N.C. Wyeth, J. Alden Weir and Ogden Pleissner, to name some.

The 2017 New Members Exhibition exposed the public to the newest Artist Members of the Salmagundi Club.  On display was a piece of my work from the second series, "Forgotten" which depicted an abandoned military base on the East Coast of Greenland.  The Salmagundi Club is located at 47 Fifth Avenue, New York, NY, 10003, USA.  Their Web site is www.salmagundi.org. 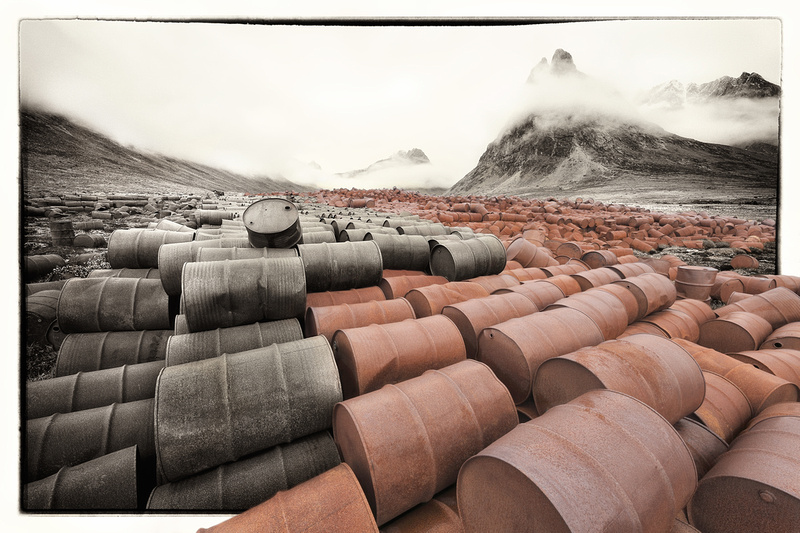 Forgotten #5"Forgotten" is a portfolio of images that depict an old abandoned World War II U.S. Military Base in East Greenland, that is yet, to this day, to be cleaned up. The fuel drums continue to leak over a half-century later, reminding the viewer of the lingering destructive cost of war. The digital technique used in this series metaphorically combines the historic black & white photographic style with the contemporary color edge-bleeding technique to represent the lingering passage of time.