"Endangered" is conservation exhibition designed by Art4Apes to benefit the welfare of orangutans and chimpanzees. Works sold at this exhibition will benefit the Center For Great Apes, a 501(c)3 charitable organization which provides a sanctuary and rescue facility for great apes that have been retired from research labs and the entertainment industry or abandoned as pets. The Center provides care with dignity in a safe, healthy and enriching environment for great apes in a need of lifetime care. Their facility is situated on over 100 tropical wooded acres in Wauchula, Florida, which resembles their natural environment. The exhibition runs at the Miami Club Rum Distillery on December 4 - 6, from 2pm - 9pm, located at 2320 N. Miami Avenue in Miami, Florida. An artists reception is held on Thursday, December 4th, from 7pm - 9pm that I will be attending.  The exhibition features conservation related work by contemporary artists and photographers, as well as a new piece by Bubbles, the chimpanzee once owned by singer and songwriter, Michael Jackson.

The jurors for this exhibition were Carolyn Benesh, Thom Collins and Joel Sartore.  Carolyn Benesh has been a Coeditor and Copublisher of Ornament magazine since 1974.  She currently serves on the board of the PBS series, Craft in America. She has served as juror for many of the nation's top craft shows such as the Smithsonian Craft Show and the Excellence in Art to Wear at the Philadelphia Museum of Art Craft Show. Thomas Collins is an arts administrator, art historian, educator and author with more than 15 years of experience serving as director and curator at several of America's top museums, including director of the Neuberger Museum of Art in Westchester County, New York; director of the Contemporary Museum in Baltimore, Maryland; and chief curator at the Contemporary Arts Center in Cincinnati, Ohio. He was recently named director of Perez Art Museum Miami, formerly Miami Art Museum in August, 2010.  Joel Sartore is a photographer, speaker, author, teacher conservationist, National Geographic Fellow and a regular contributor to the National Geographic Magazine. He is founder of The Photo Art, a multi-year documentary project to save species and habitat, and he has written several books including RARE: PORTRAITS OF AMERICA'S ENDANGERED SPECIES; PHOTOGRAPHING YOUR FAMILY, and NEBRASKA. He has been a contributor to Audubon Magazine, Time, Life, Newsweek, Sports Illustrated and his work has been the subject of several national broadcasts, including National Geographic's Explorer, the NBC Nightly News, NPR's Weekend Edition and an hour-long PBS Documentary, At Close Range. 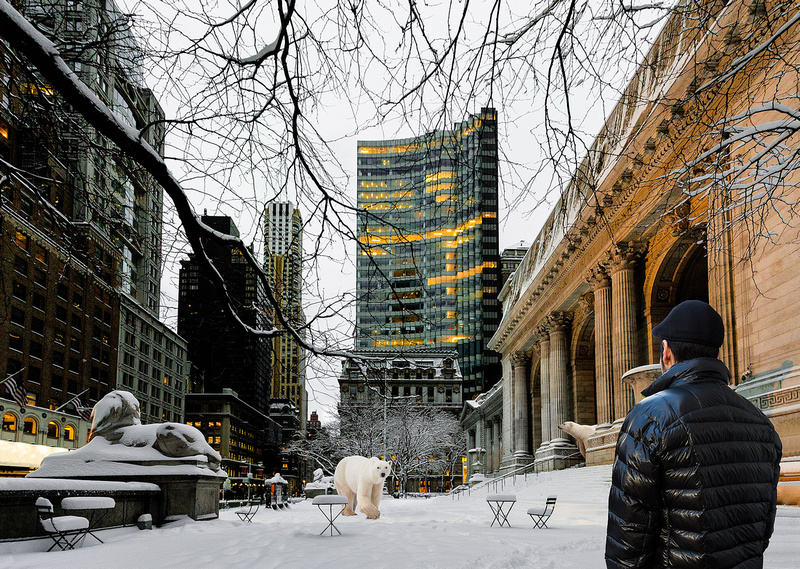 Work accepted into this juried exhibition were required to reflect on the theme of "Endangered" as it applies to animal or plant species, the environment, ecosystem or natural world.  Species, while not required to be listed as Endangered, were to have some element of threat to their survival. The selected print, "Visiting The New York Public Library," was the 1st Prize winner of the 2014 Juried Exhibition at the Center for Photographic Art in Carmel, California in 2014. This print was also most recently exhibited at the 3rd Biennial for Fine Art & Documentary Photography at the Municipal Heritage Museum in Malaga, Spain.  It has also been acquired for their permanent collection by the Crocker Museum in Sacramento, California. In the summer of 2014, the print was exhibited with its series, "New York City Wildlife," at SohoPhoto Gallery in a solo exhibition. The print went on to be exhibited at the Houston Center of Photography's "32nd Annual Juried Membership Exhibition" as well as being juried into Aperture's "2014 Summer Open" Exhibition in New York City. More about this unique exhibition may be found at the Art4Apes Web site.