Jurors selected "Mila" (also titled as "Saving Mila") for exhibition in the "Wildlife/Animal" Category of the 4th Annual Jackson Hole Photography Competition, produced by the Art Association of Jackson Hole, Wyoming.  The print exhibition of accepted works, of which more than 500 submissions competed for, runs April 17 through May 22, 2015, in the Art Association Gallery of the Center for the Arts in Jackson Hole, Wyoming. Jurors for this competition were Tom Mangelsen, a World renowned nature photographer; Karolina Karlic, a recipient of the John Simon Guggenheim Memorial Foundation Fellowship; and Ramak Fazel, whose work was on exhibition at the 14th International Architecture Exhibition in the Venice Biennale, Italy.  The bios of the three jurors are noted further below the image, and further information about the upcoming exhibition may be found at the Art Association of Jackson Hole's Web site, http://www.artassociation.org .

This image is part of "The (Unwanted) Pooch Puzzle," a collection of images created to help rescue domestic pets from euthanasia by seeking to cultivate a fresh perspective using the creative arts to bring additional awareness and support for the problem of unwanted domestic pets.  Every 9 seconds, an unwanted domestic pet is put down in the U.S., based on the latest estimates from the National Council On Pet Population. 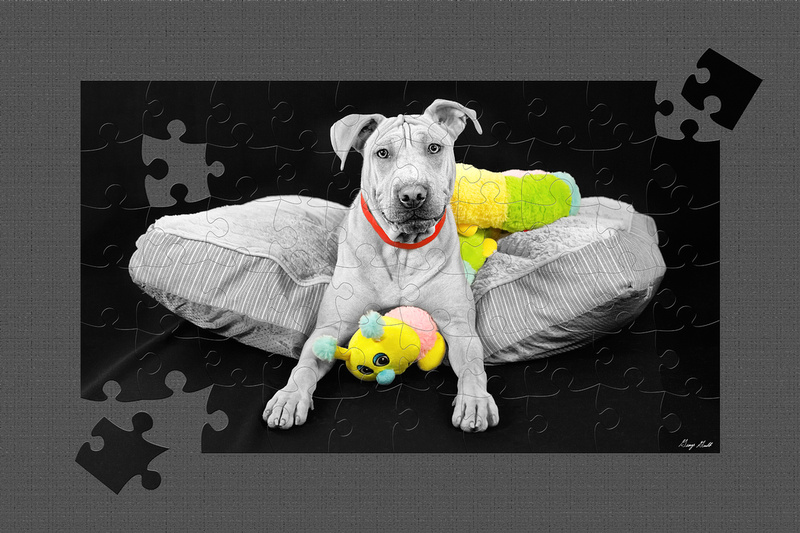 All of the dogs depicted in this project are rescued dogs, with the majority of them being photographed at the Wake County SPCA animal shelter in North Carolina, a no-kill animal shelter.  In 2014, North Carolina animal shelters killed 119,751 dogs and cats due to an "unwanted" status.  Sadly, many of these domesticated animals were just starting their lives and shared an eagerness to learn about and be a part of this world as much as humans.  The problem of high kill rates is not necessarily lower for smaller shelters versus larger ones.  A closer look at the statistics of North Carolina reveal wide variances between animal shelters.  For example, a smaller shelter in Polkton, NC, took in 678 dogs in 2014, killing 587 of them (86.6%). By contrast, a larger shelter in Henderson, NC, took in 1,566 dogs in 2014, and only killed 39 of them (2.5%). So why is Henderson's animal shelter so much more successful with their pet adoption rates than Polkton's animal shelter?

Fortunately, concerned citizens of Lexington, NC, fed up with the high kill rates in their town, convinced their county commissioners to vote five to two to turn over the County's animal shelter from the sheriff's department to a nonprofit, United Animal Coalition (UAC), on Dec 9, 2014. UAC was currently running Guilford County's animal shelter, which increased adoptions there from a paltry 3% to 52% as of 2014 and increased return of animals to rightful owners nearly 20%.

Sadly, as long as people are regarding domestic pets as disposable property, this problem will remain difficult to cure. However, concerned advocacy at the local level, as occurred in Lexington, NC, can start to show surprisingly better results. This project seeks to provide creative support for organizations seeking to address this problem. Through donations of this work for benefit auctions, to raising community awareness and combining animal welfare with artistry, the Artist hopes to inspire renewed energies to tackling this global problem.  The metaphor of the puzzle used in this series is done in part to describe a problem that is difficult to solve, but not unsolvable, as well as to appeal to the viewer to reach out and to be the missing pieces in these unwanted dogs lives through adoption.

Mila has been adopted.  The shelter staff at the SPCA of Wake County has this to say about her.  "Mila. What can you say about a gal like Mila? Well, she's the most gorgeous dog you've ever met, that's for sure. She's an energetic girl that loves playing with people of all shapes and sizes. She's even been known to jump a fence or two. Is it a bit pretentious of me to be speaking in the third person? I'm Mila, and I'm so happy you're spending some time with me today. I may be a little bit timid when you first meet me, but who can blame me? So many changes have been happening lately that I just need some stability. I love playing in the yard and catching the Frisbee, but I'm a bit of an escape artist. My outside time will always have to be supervised. I've been doing great on my house-training, but don't get too upset if I still have some accidents. I'm still a young girl that will need help adjusting to my new home. I would appreciate some tough toys for me to chew on - a Kong or a Nylabone would be great for that! I would really appreciate if you could spend some time with me to really get me out of my shell. I'm sure you'll be in love the second I start warming up to you! I currently weight 46 lbs., and I may reach 60 to 75 lbs., when I'm full grown."

Tom Mangelsen: Thomas D. Mangelsen has long been recognized as one of the world’s premier nature photographers. Mangelsen’s limited edition prints have been collected by more people worldwide than any living nature photographer. Not only an artist but also a conservationist, he was recently named Conservation Photographer of the Year by Nature’s Best Photography. Mangelsen’s images are known for their exquisite composition, light, and animal behavior as well as illustrating a strong sense of place. Sensitivity to his subjects and a deep reverence for their surroundings is a defining mark of Mangelsen’s work. In 2006, Tom was chosen as one of Jane Goodall’s Heroes of the Animal Planet and profiled in the television series of the same name. During his 40 years of image making, he has been profiled on CNN, National Geographic, NBC’s “The Today Show,” as well as many other television programs. Mangelsen has been recognized as Wildlife Photographer of the Year by BBC Wildlife, as well as Outstanding Nature Photographer of the Year by the North American Nature Photographer Association and named one of the “100 Most Important People in Photography” by American Photo Magazine. In 2002 he received an Honorary Fellowship from the Royal Photographic Society. Tom’s outdoor ethics are deeply rooted in a childhood filled with adventure along the Platte River in Nebraska where he gained a passion for the wild that launched a lifetime commitment to the natural world.

Karolina Karlic: Karlic is a recipient of the 2011 - 2012 John Simon Guggenheim Memorial Foundation Fellowship in Photography, which supports her investigations in diasporic existence and the human condition, more specifically surrounding Brazil’s rubber industry and Henry Ford’s influence on the industrial and agricultural landscape. She holds a MFA in Photography and Integrated Media from the California Institute of Arts and a BFA in Photography from the Minneapolis College of Art and Design. Karolina Karlic is a Los Angeles-based photographer, born in Wroclaw, Poland. Karlic’s work is invested in the representation of American culture and diasporic existence surrounding industry. In search of the American dream, her family immigrated to Detroit in 1987 when her father fled communist Poland to find work in the U.S. auto industry. As the stock of Ford, General Motors and Daimler Chrysler’s North American operations eventually crumbled, Karlic’s work continues to focus on labor, immigration, outsourcing and diaspora. From this uprooted childhood, her practice concentrates on the human effects of social upheaval: Close to Home (2005) focuses on Ukraine’s post-Soviet conditions; The Dee (2007) depicts Detroit’s de-industrialization; Dear Diary (2008) explores one online community searching for companionship; RE:What Color is the Sacred (2009), sponsored by Tim Wride and the French Consulate, examines Western views of French Polynesia and the “re-birth” of Tahitian culture. Aberdeen Sierra Leone (2011) portrays a group of progressive post-war adolescent males in West Africa. Rockin’ the Backen (2012) documents a modern day boomtown of North Dakota, USA. Most recently, her new work Rubberlands (2014) weaves together research materials from the Henry Ford archives, fieldwork in Brazil’s rubber plantations and the history of Henry Ford’s forgotten jungle city – Fordlandia, in the Amazon. She has self produced multiple artist books, The Dee (2006), which is a collection of images depicting the City of Detroit, and ELEMENTARZ (2010), which uses the auto industry in Detroit (stretched across the US) and over to Eastern Europe as a framework to discuss current issues in America. It is a story told through a father daughter relationship, doubling on what evolves and shifts between them both. A self-published limited edition of PRIMER (printed 2014) is conceived as a single cohering essay, albeit quite deliberately departing in its ending from the standard, sometime monotonous, road trip. In this 2014 edition, the afterword essay, "Bread and Roses" by Sally Stein (who also excerpts a passage from her late husband, Allan Sekula, Karlic’s late mentor), writes about the the car-culture oriented road trip that in this case extends over two continents back home to an émigré, automotive engineer father's backyard in Detroit. She was a participant in Center 2007, awarded the Minnesota State Arts Board Initiative Grant 2008, a participant in ATOUT France, collaboration with curator Tim Wride and the French Consulate of Los Angeles 2010. She was awarded the International Photography Award IPA 2011 by the Lucie Foundation in the field of Industrial Photography. She was awarded artist in residence at Light Work in 2013 and the Cultural Exchange International Fellowship through the Los Angeles Department of Cultural Affairs & the Sacatar Foundation in 2013. Her series: The Dee, Close to Home, Primer/Elementarz, Rubberlands have been exhibited nationally at galleries including Franklin Art Works, Minneapolis College of Art and Deisgn, Intermedia Arts, Independent Feature Project in Minneapolis; Wall Space of Seattle, Atmosphere Group in Chicago; Louis Stern Fine Arts, and Stephen Cohen Gallery in Los Angeles; The Art of Photography Show 2011 at the Museum of Photographic Arts of San Diego; The Consulate of France in Los Angeles, NYC, and New Orleans. In 2010 her film “This Part of the Legend of a Dream” screened at REDCAT, the Roy and Edna Disney/CalArts Theater in Los Angeles.

Ramak Fazel: After earning a degree in Mechanical Engineering from Purdue University, Ramak Fazel began an immersive study of photography and graphic design in New York City. His developing professional practice took him to Milan, Italy, where from 1994 through 2009 he lived and worked as a photographer. Through a series of personal displacements and migrations, Ramak developed an acute sense of cultural fluidity while his interest in observation continued to impact his artistic practice. Born in Iran and raised in Fort Wayne, Indiana, his youth simultaneously embodies and subverts the ideal of the American Midwest. Fazel’s personal projects and artistic practice address his interest in the affects of geographic displacement and the inherent contradictions of cultural identity. In a series of photographic portraits, Fazel has examined the idea of the individual as a reflection of place and an expression of influences, seeking to undermine rigid constructs and locate what is common in the conditions of diverse individuals. Ramak completed his M.F.A at Cal Arts. He currently lives and works in Los Angeles, California. In 2008, Ramak exhibited his project "49 Capitols," a photographic essay on his trip through 49 U.S. State Capitols, at Storefront for Art and Architecture in New York City. Along with photographs of the journey, the project provides a narrative of the search of an increasingly complicated idea of American identity. An installation of his ongoing project “The Business of People” was on exhibition at the Monditalia Section at the 14th International Architecture Exhibition la Biennale di Venezia in 2014. Ramak Fazel explores the affect of geographic displacement and inherent contradictions of cultural identity. Working within, around and sometimes against the traditions of photography and installation, he has examined the idea of the individual as a reflection of place and an expression of influences.