"The (Unwanted) Pooch Puzzle" will be exhibiting in a solo exhibition in the [SOLO] section of Art Expo New York 2015 in Booth S409, at Pier 94 in Manhattan, New York City.  The four day event will join hundreds of other artists and galleries from around the World in one of the country's largest art exhibitions.

"The (Unwanted) Pooch Puzzle" is a project developed in coordination with the SPCA in Wake County, North Carolina, to help rescue domestic pets from euthanasia.  The project seeks to cultivate a fresh perspective using the creative arts to bring additional awareness and support for the problem of unwanted domestic pets.  Every 9 seconds, an unwanted domestic pet is put down in the U.S., based on studies from the National Council On Pet Population which estimates that 3.7 million are put down each year.

All of the dogs depicted in this project are rescued dogs, with the majority of them being photographed at the Wake County SPCA in North Carolina, a no-kill animal shelter.  In 2014, North Carolina animal shelters euthanized 119,751 dogs and cats due to an "unwanted" status.  Sadly, many of these domesticated animals were just starting their lives and shared an eagerness to learn about and be a part of this world as much as humans.  The problem of high kill rates is not necessarily lower for smaller shelters versus larger ones.  A closer look at the statistics from the North Carolina Dept. of Agriculture reveal wide variances between animal shelters.  For example, a smaller shelter in Polkton, NC, took in 678 dogs in 2014, killing 587 of them (86.6%). By contrast, a larger shelter in Henderson, NC, took in 1,566 dogs in 2014, and only killed 39 of them (2.5%). So why is Henderson's animal shelter so much more successful with their pet adoption rates than Polkton's animal shelter?

Fortunately, concerned citizens of Lexington, NC, fed up with the high kill rates in their town, convinced their county commissioners to vote five to two to turn over the County's animal shelter from the sheriff's department to a nonprofit, United Animal Coalition (UAC), on Dec 9, 2014.  UAC was currently running Guilford County's animal shelter, which increased adoptions there from a paltry 3% to 52% as of 2014 and increased return of animals to rightful owners nearly 20%. 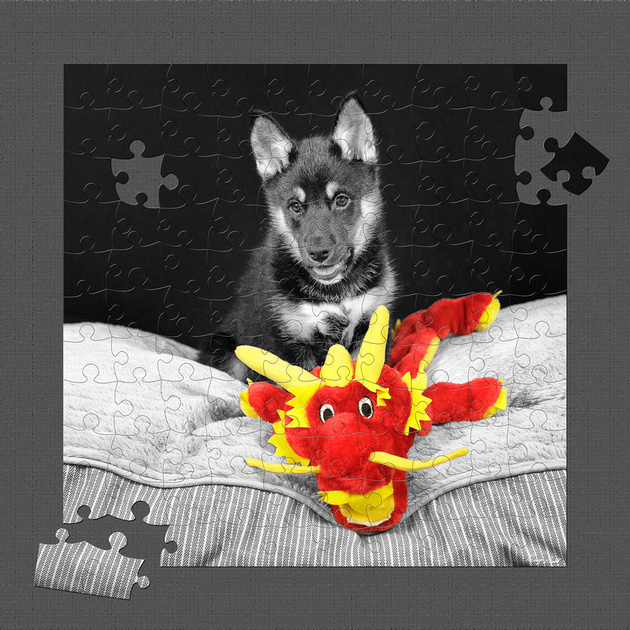 Saving JonahSaving Jonah (under the alternative title, Rescued Dog Number 2) was accepted into three salons at the Trierenberg Super Circuit, one of the World's largest photography competitions, located in Austria. This competition features hundreds of thousands of images from around the world competing for exhibitions and awards.

Sadly, as long as people are regarding domestic pets as disposable property, this problem will remain difficult to resolve. However, concerned advocacy at the local level, as occurred in Lexington, NC, can start to show surprisingly better results. This project seeks to provide creative support for organizations seeking to address this problem. Through donations of this work for benefit auctions, to raising community awareness and combining animal welfare with artistry, the Artist hopes to inspire renewed energies for tackling this global problem. The metaphor of the puzzle used in this series is done in part to describe a difficult problem that can be solved, as well as to appeal to the viewer to reach out and to be the missing pieces in these unwanted dogs lives through adoption. 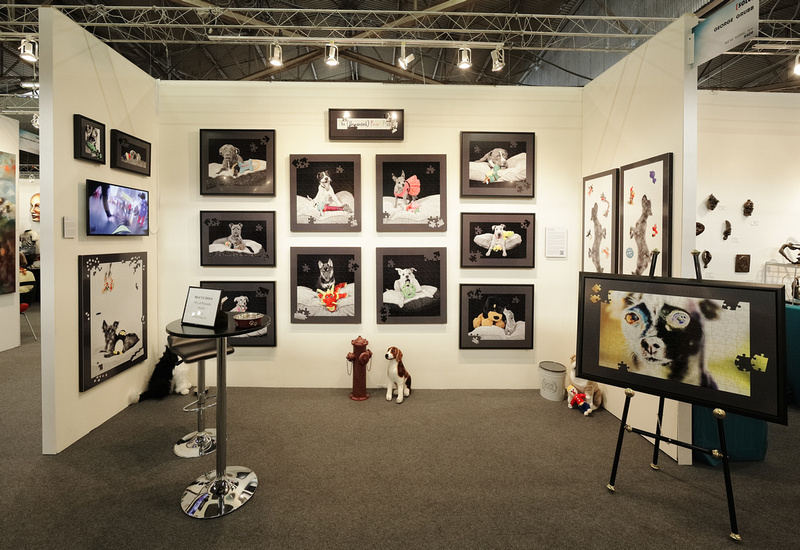 The SPCA of Wake County is a local, independent, non-profit organization that receives no government funding or tax dollars.  They  are a no-kill shelter that relies almost entirely on private donations to fund their annual operating budget of $2.4 million.  The SPCAs are a group of local humane societies around the world that operate independently from each other and are not affiliated with a national organization, as most people may presume.  Each SPCA is a separate entity governed by its own policies and board of directors.  To learn more about the Wake County SPCA in North Carolina, please visit their Web site at www.spcawake.org.  To learn more about [SOLO] at ArtExpo, visit their Web site at www.artexpo.com. To view the prints online, please click here.