Reigning Over Central Park took 2nd Prize in the “Fine Art” Category in the 6th Edition of the Pollux Awards in York, United Kingdom. From there, it would be juried into the Connecticut Academy of Fine Arts’ 103rd Exhibition in 2014. Following this exhibition, the image would participate in a solo exhibition at Soho Photo Gallery in New York City, and then go to Malaga, Spain, for exhibition in the “3rd International Biennial of Fine Art and Documentary Photography” exhibited at the Municipal Heritage Museum. The image was also awarded an Honorable Mention and given recognition in the “2014 Cottingley Lens Competition” produced by the Buffalo Almanack and published in their June issue, 2014.

In a small limited edition of 3 prints, “Reigning Over Central Park” is a cornerstone piece in the “New York City Wildlife” series, which uses amusing absurdity to re-imagine that if we do not protect our endangered wildlife in their own natural habitats, they will have to seek refuge in a protected environment that is heavily regulated…New York City. 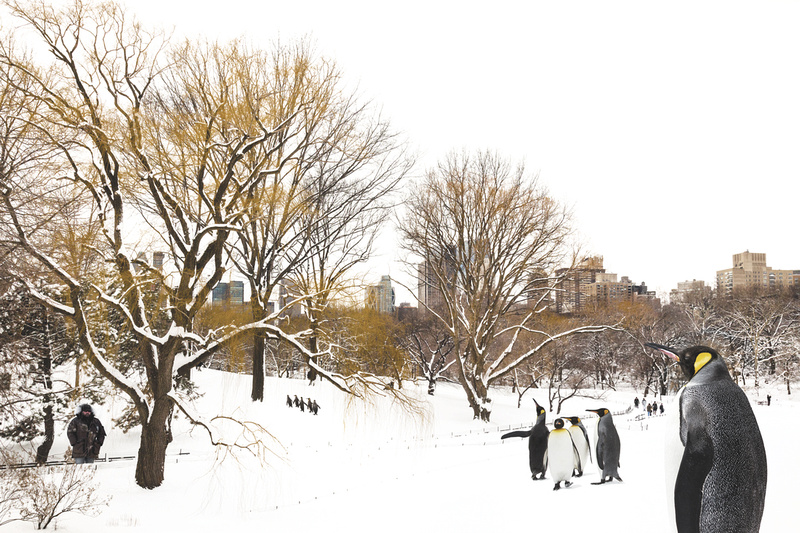 This print is sized 23” x 16”, signed, dated 2013, edition size of 3, and stamped on the verso. It is printed with pigment ink on acid-free & lignin-free 100% cotton rag paper to maximize its lifespan. It has been printed and framed by Duggal in New York City, using natural reclaimed wood with a linen liner. A certificate signed by the Artist accompanies the piece.

Three works from this series recently sold at the BioPhilia Ball, a benefit for the International Union for the Conservation of Nature’s 50th Anniversary at the Natural History Museum in London, UK for a combined total of over $25,000. Many other works in this series have gone on to win awards and exhibitions around the World, including a first prize at the Center of Photographer Arts’ 2014 Juried Exhibition in California, as well as exhibitions at Aperture, Houston Center of Photography, Garrison Art Center, Los Angeles Center for Digital Art, Carter House Gallery, Providence Art Club, Jacksonville Center for the Arts (Virginia), and a first prize at the 2014 Wallowa Valley Festival of Arts in Washington State.

In June, the Crocker Museum in Sacramento, California, (the oldest public museum in the Western US and one of 800 accredited museums by the American Alliance of Museums) will put up for auction, following an exhibition of it, another piece from this series, "Escaping Central Park."