Plight of the Orangutans - Now on Social Documentary.Net

On a visit to the Orangutan Care Centre in 2013, I had the opportunity to meet with Dr. Galdikas, the famed primatologist, and receive a tour of this facility.  The Orangutan Care Centre, located in Borneo, Indonesia, was originally conceived to rescue and rear about 30 orphaned orangutans at a time with the goal of reintroducing them back into the wild.  But due to the immense scale of deforestation by the palm oil plantations, along with the wide-spread poaching, their numbers have ballooned to ten times this amount at the care center.  The Bornean orangutan (Pongo pygmaeus) is now rated as Endangered by the IUCN's Red List of Threatened Species, and it is estimated that less than 70,000 now live in the wild. The exhibit can be visited by following this link.  Selected images from this online exhibit are posted below as well. 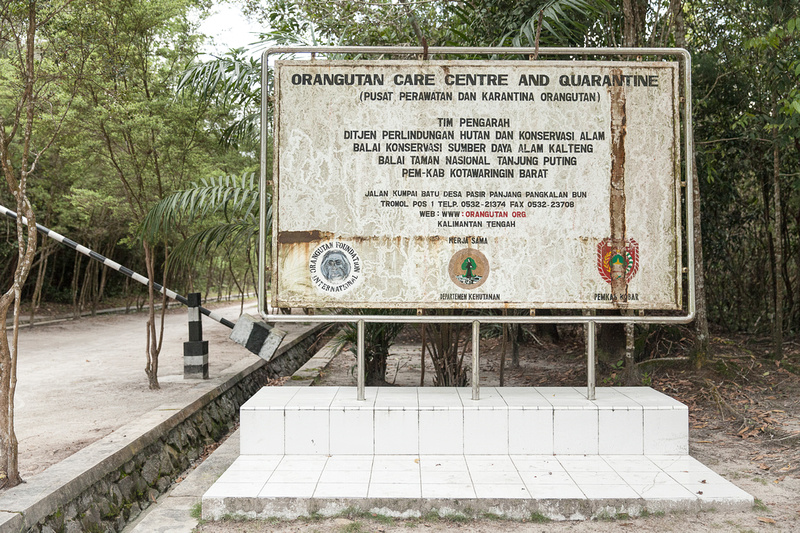 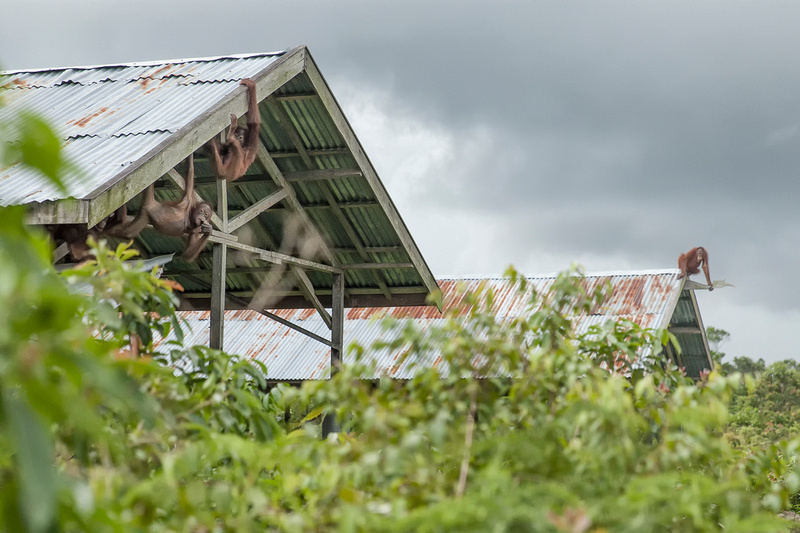 The center was developed to rescue orphaned baby orangutans whose mothers had either been poached, or had been held captive as pets. The center provides medical, emotional and parental care in a long process that will attempt to prepare them for reintroduction back into the wild. Picture here, juvenile orphans are released daily to play on the grounds supervised by the staff. This daily contact with the forest helps prepare them for the day they can be fully released into the wild. 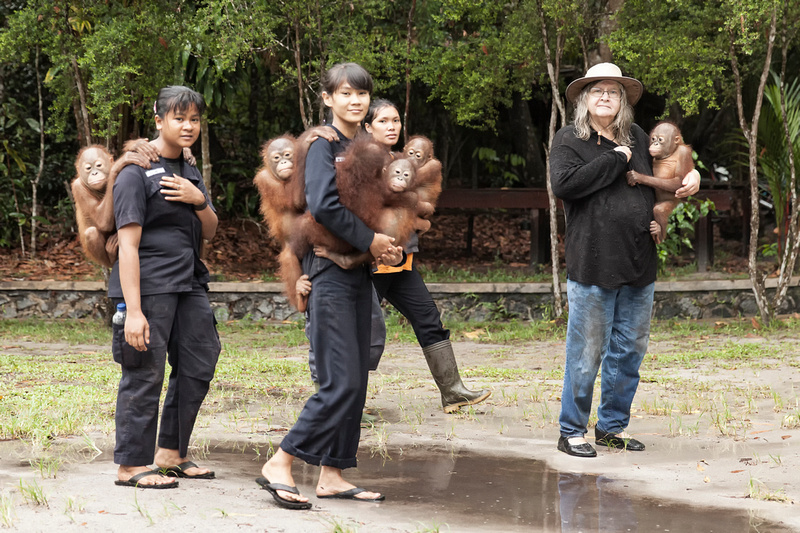 Pictured here, the renowned primatologist, Dr. Birute Mary Galdikas, carries one of the orphaned baby orangutans along with her staff. Dr. Galdikas has worked extensively with the orangutans in Borneo, studying their behavior and habitat, and is considered the World's foremost authority on the orangutans. Like Jane Goodall and Dian Fossey, Dr. Galdikas also was a protege under Kenyan anthropologist, Dr. Louis Leakey. 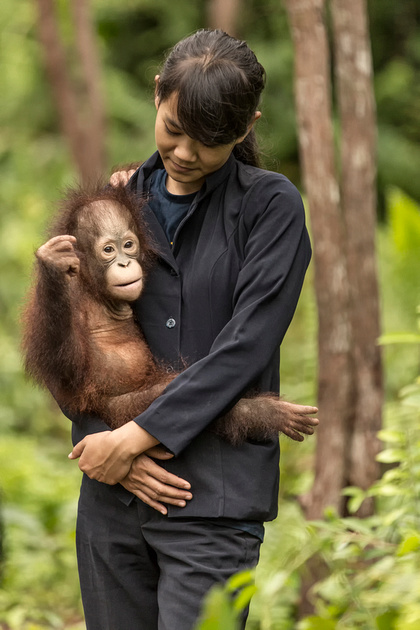 The staff carries the younger orangutans from their holding bins for their daily feeding and playtime excursion. When a new baby arrives at the care center, it will undergo a thirty day quarantine whereby an extensive health examination is given to assess the special needs of the newly rescued orphan. 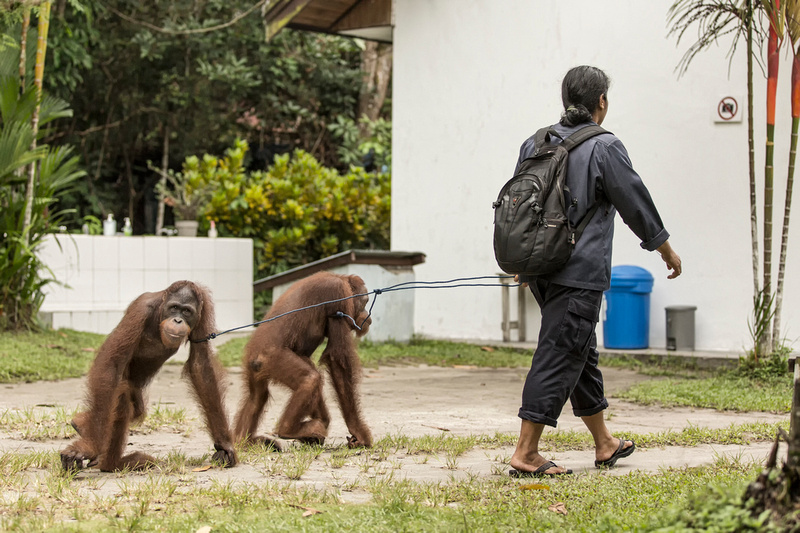 At the care center, medical attention is provided for treatment of parasites, malaria, tuberculosis and hepatitis, along with other potential ailments and diseases. Pictured here, juvenile orangutans need little guidance to find their way around the grounds, yet the small rope acts more as a lead to help the move about with their guide. 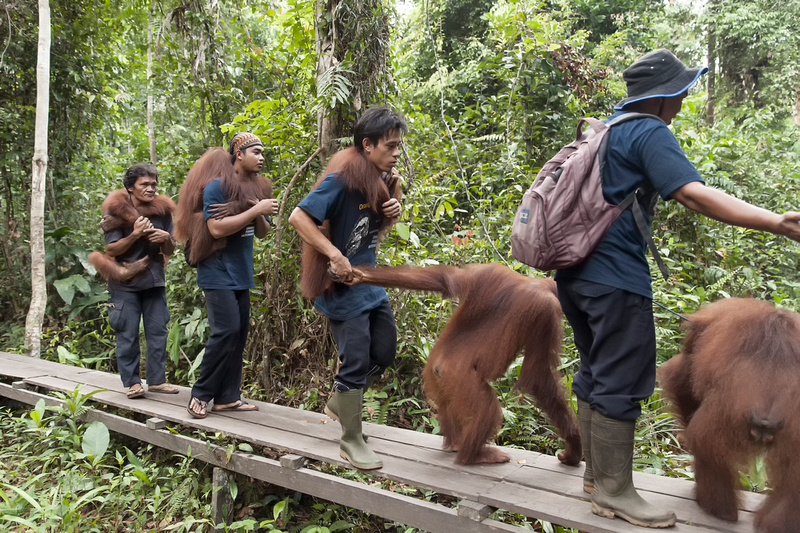 Caregivers at the center, take the orangutans out daily for exercise and feeding. This experience enables them to explore and discover life in the forest while staying under the watchful eye of their caregiver. 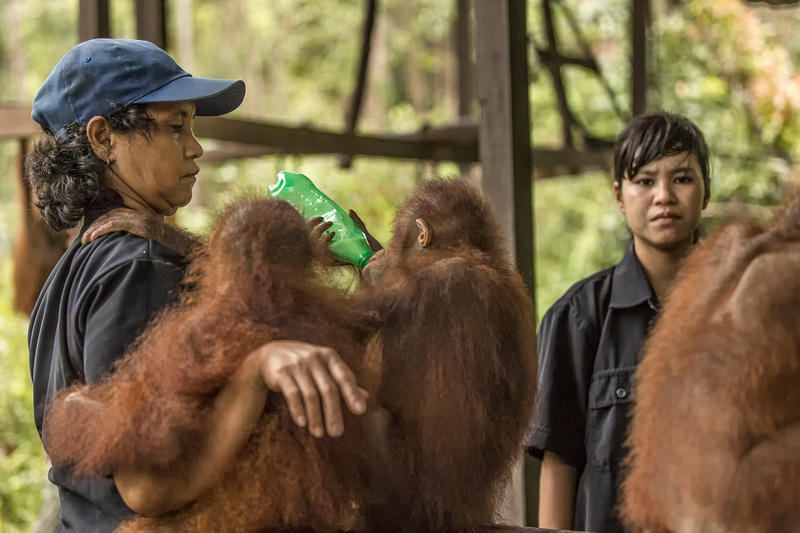 The number one threat to orangutans is currently clear-cutting and poaching derived from coming into conflict with palm oil plantations. It is estimated that up to 5,000 orangutans are killed annually due to the Palm Oil industry's practices, and widespread deforestation. The clear-cutting by these plantations wrecks even more havoc on their habitat than illegal logging. For this reason, many conservation groups implement boycotts on palm oil and products utilizing this ingredient. 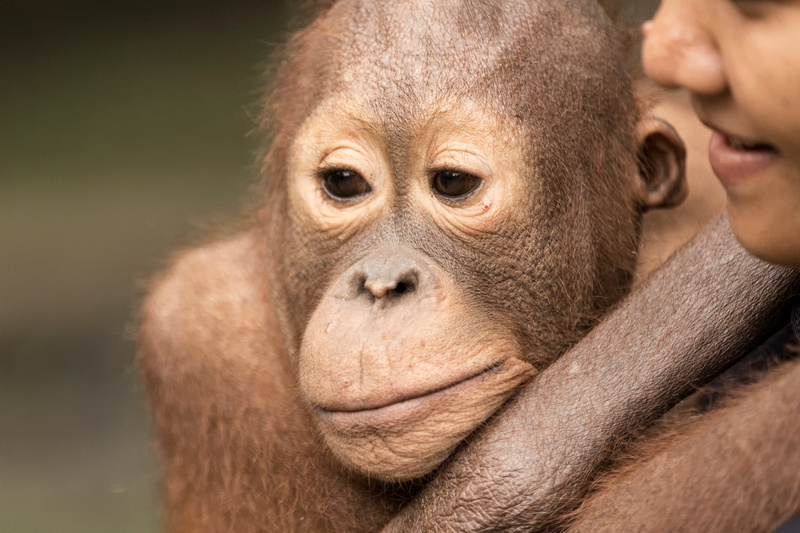 One of the key challenges in preparing an orphan for the wild, is a condition known as "failure to thrive." This is the equivalent of losing the will to live, and rejuvenation from this condition can require many years of attentive care at the center. The center was originally designed to support about thirty orphans, but the crisis has grown so vast that the center is overpopulated with nearly 300 orphaned orangutans. 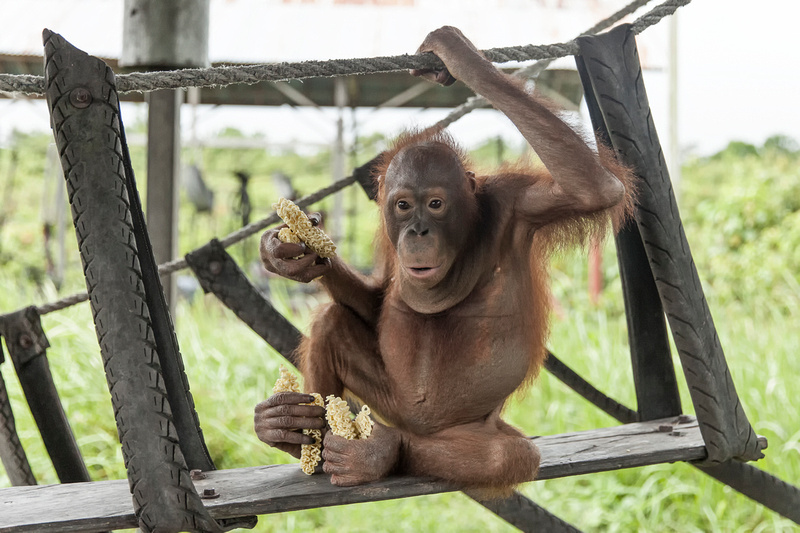 In the covered shelters, orangutans are able to feed and exercise on a daily basis. They do not leave their caregivers, and thus, there is no need for a fence to contain them. Orangutans are native only in Indonesia and Malaysia, and fortunately, it is against the law to keep them as pets in those countries, but not so in other countries. Thus, the illegal pet trade thrives, which usually involves poaching the mother in attempts to steal her baby. 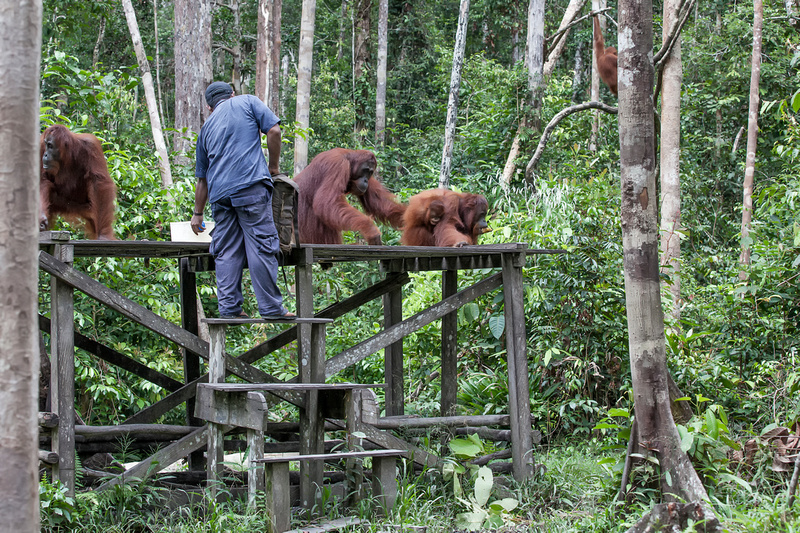 When orangutans are ready to be released into the wild, they have access to a feeding station to help stabilize their new transition. Here, a caregiver is pouring milk into a container on an outdoor feeding station in Tanjung Puting National Park, which is nearby the care center. 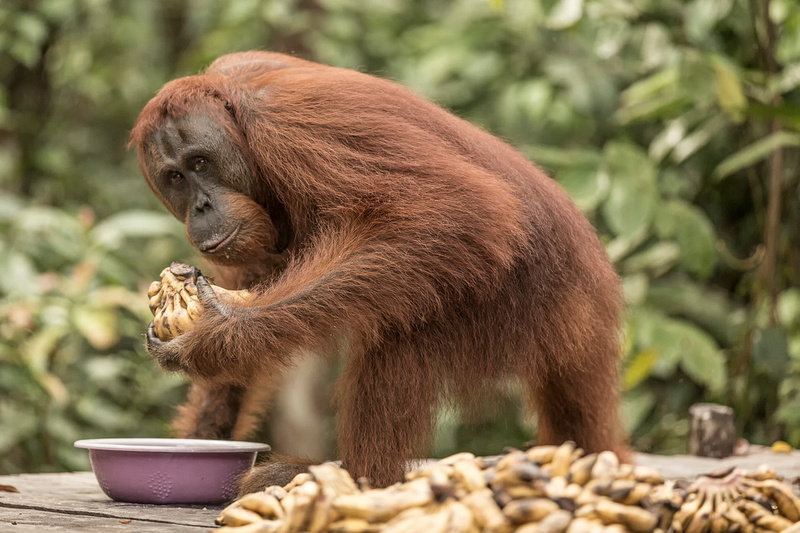 Sometimes, orangutans from the wild will also take advantage of the feeding stations. 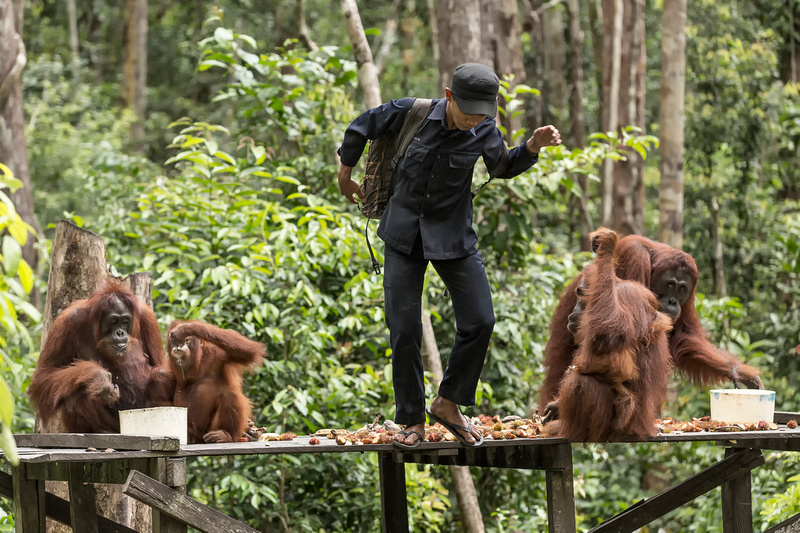 The care center is staffed full-time by veterinarians, along with support staff, and medical doctors are available on an as-needed basis. Approximately 130 people work at the center, in helping to care for the approximately 300 orphaned orangutans. The care center is outfitted with emergency operating room technologies, including x-ray, lab and special quarantine living quarters. 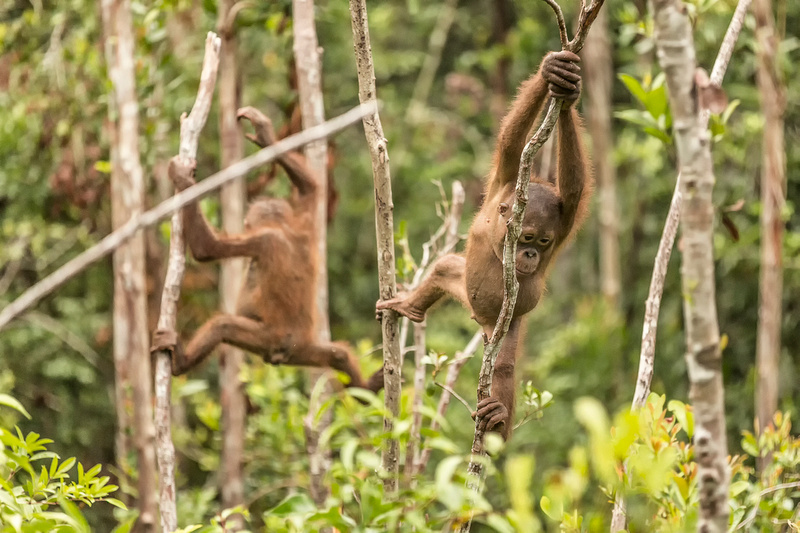 The baby orphans enjoy playing in the jungle, always keeping their caregivers in sight. There is no netting or fence to prevent them from escaping, as the orphans will quickly return to their caregivers when they see them start to depart. 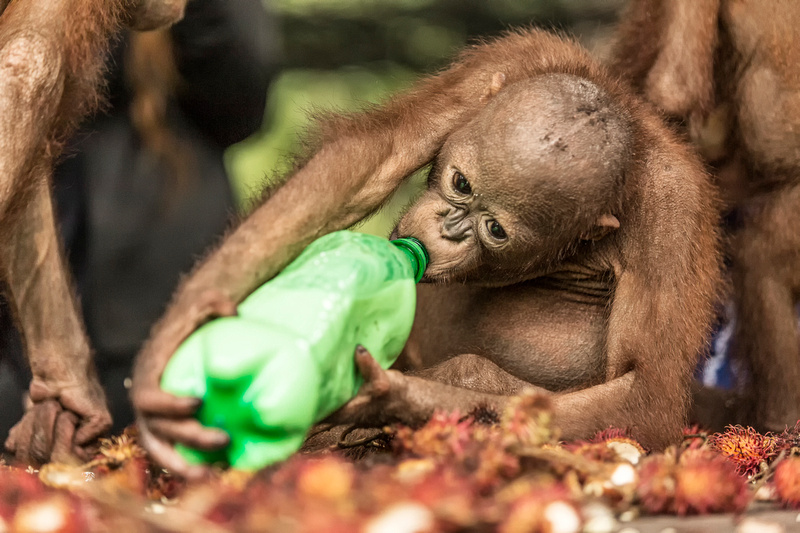 Infant orangutans usually require up to eight or nine years of care from their mother before they are able to venture out on their own. Thus, without their mothers, the bonds with their caregivers becomes critically vital for their mental and emotional well being. 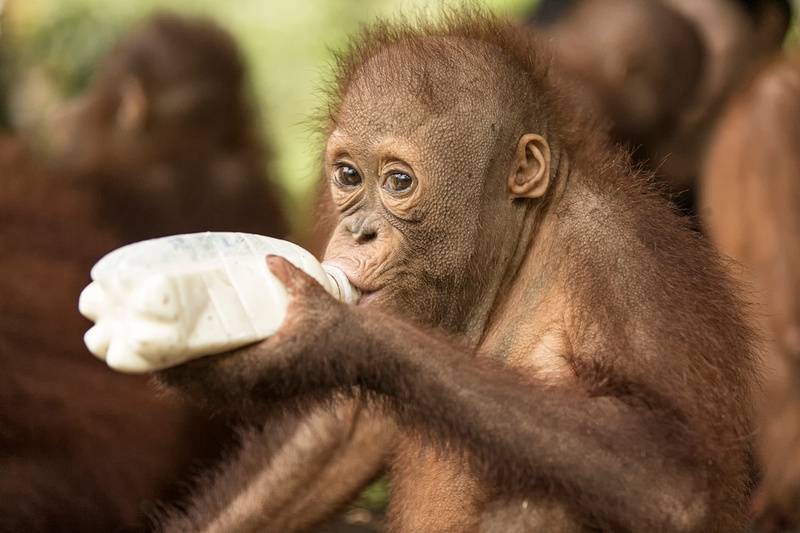 The orphans are given a plastic bottle of milk, and they know exactly how to drink from it with little help. 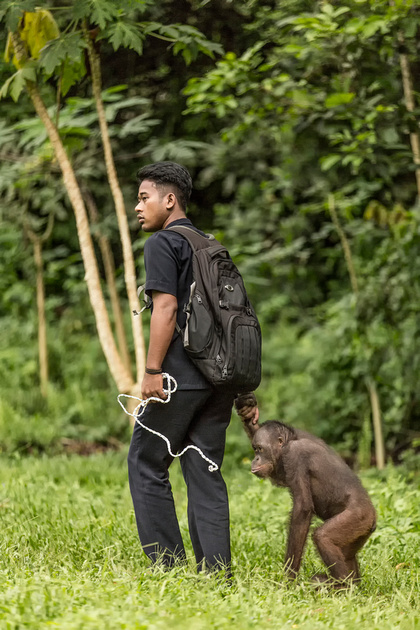 Following an active day of play, this orangutan returns with his caregiver back to his pen to sleep. 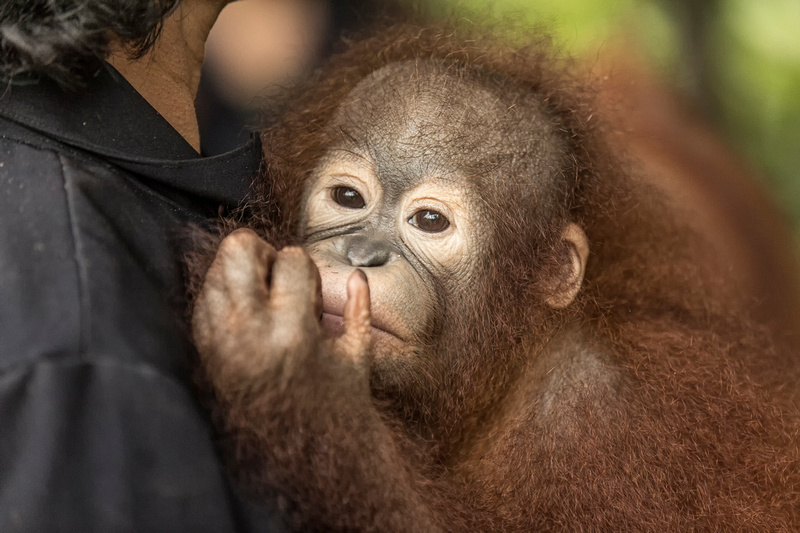 Some of the younger orphans fall asleep before they even make it back to their pens, after a day of play. 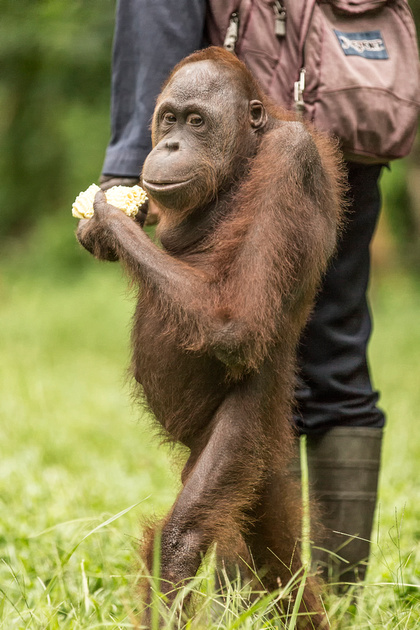 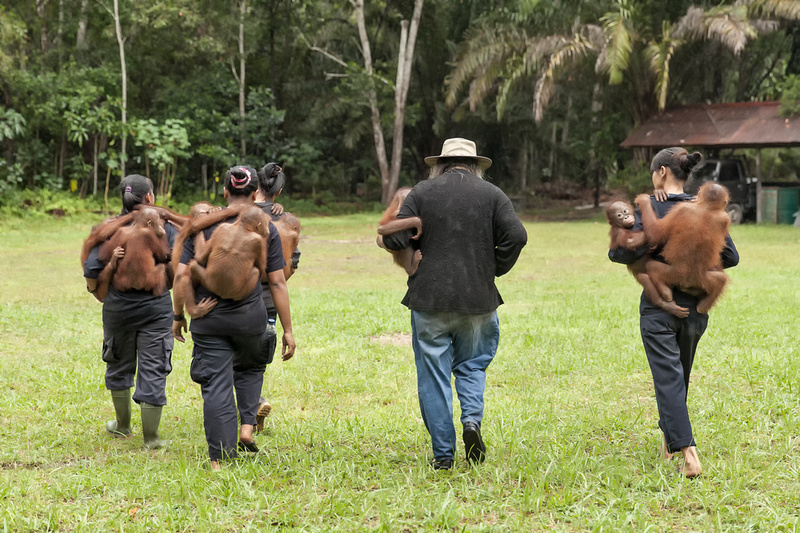 Dr. Galdikas and her staff return to the center, after a day of active play and feeding the orphaned orangutans. For information on how to support the orangutans and their cause, Dr. Galdikas's foundation can be visited online at www.orangutan.org.

While in Tanjung Puting National Park, I set my digital camera to video mode and recorded the following video for this presentation.