I have just returned from Malaga, Spain, where the 3rd Biennial of Fine Art & Documentary Photography is being held, produced by the Worldwide Photography Gala Awards, in partnership with the City Hall of Malaga and the Cultural Association La Lupa.  The event is being hosted at the Museo del Patrimonio Municipal (Heritage Municipal Museum) of Malaga, one of the most ancient cities of Europe, with a deep mediterranean culture and the hometown of Pablo Picasso.  It will run from September 18 through November 9th, 2014.

The first edition of the Biennial was held in June 2010, at the Circle of Fine Arts in Madrid, under the name of "2009 WPGA Awards." It was converted into a Biennial after deciding to organize a second edition in Buenos Aires in January 2012 at the Borges Cultural Center.  For the 3rd Biennial, the event was moved to Malaga, Spain.  The fair combines award winning artists from the 2012, 2013 and 2014 editions of the Pollux Prizes and the Julia Margaret Cameron for Women Photographers Prizes.  This Biennial resulted in a selection of over 500 art pieces that ranged from consecrated artists to emerging talents from 27 countries.  The curators of the event were Analy Werbin, Victoria Werbin and Julio Hardy.  More information about the event is available at http://www.malagabienal.com/

Selected prints from the "New York City Wildlife" series, as well as from my recent trip to Borneo to photograph the wild orangutans, were featured in this exhibition.  All-in-all, fourteen prints, measuring 40x60cm, were presented in a dedicated wall at the exhibition. From the "New York City Wildlife" series, the images exhibited images were, WANDERING OVER MANHATTAN, ADMIRING LUGGAGE IN WASHINGTON SQUARE PARK, REIGNING OVER CENTRAL PARK, LEAVING SUBWAY AT 23RD STREET, RIDING THE NEW YORK SUBWAY, ADMIRING WOMAN ADMIRING GAZELLE, ESCAPING CENTRAL PARK (which was also selected to be featured on the cover of the exhibition catalog), STROLLING THROUGH BRYANT PARK, and TAKING OUT THE GARBAGE (pictured below).  From my wildlife series, the images exhibited were FEMALE BORNEAN ORANGUTAN WITH BABY, BORNEAN ORANGUTANS IN TANJUNG PUTING NATIONAL PARK, JUVENILE BORNEAN ORANGUTAN, and ALPHA MALE BORNEAN ORANGUTANS. These images may be viewed on this Web site at http://georgegrubb.com/p522401439 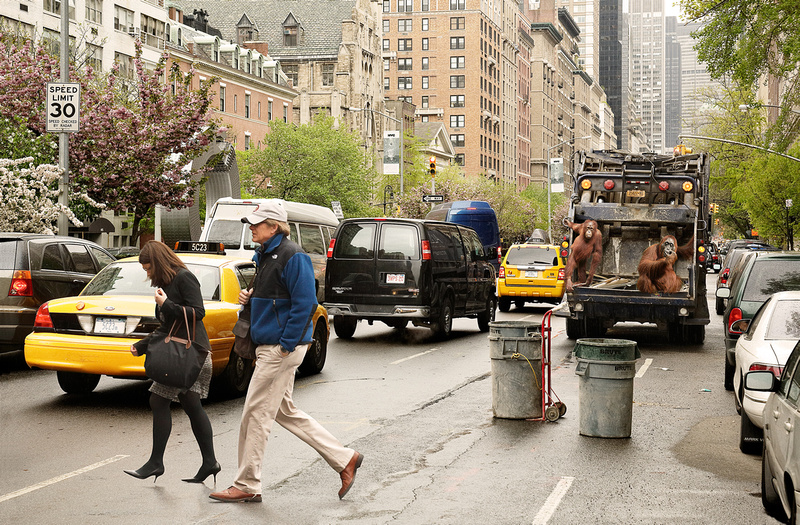